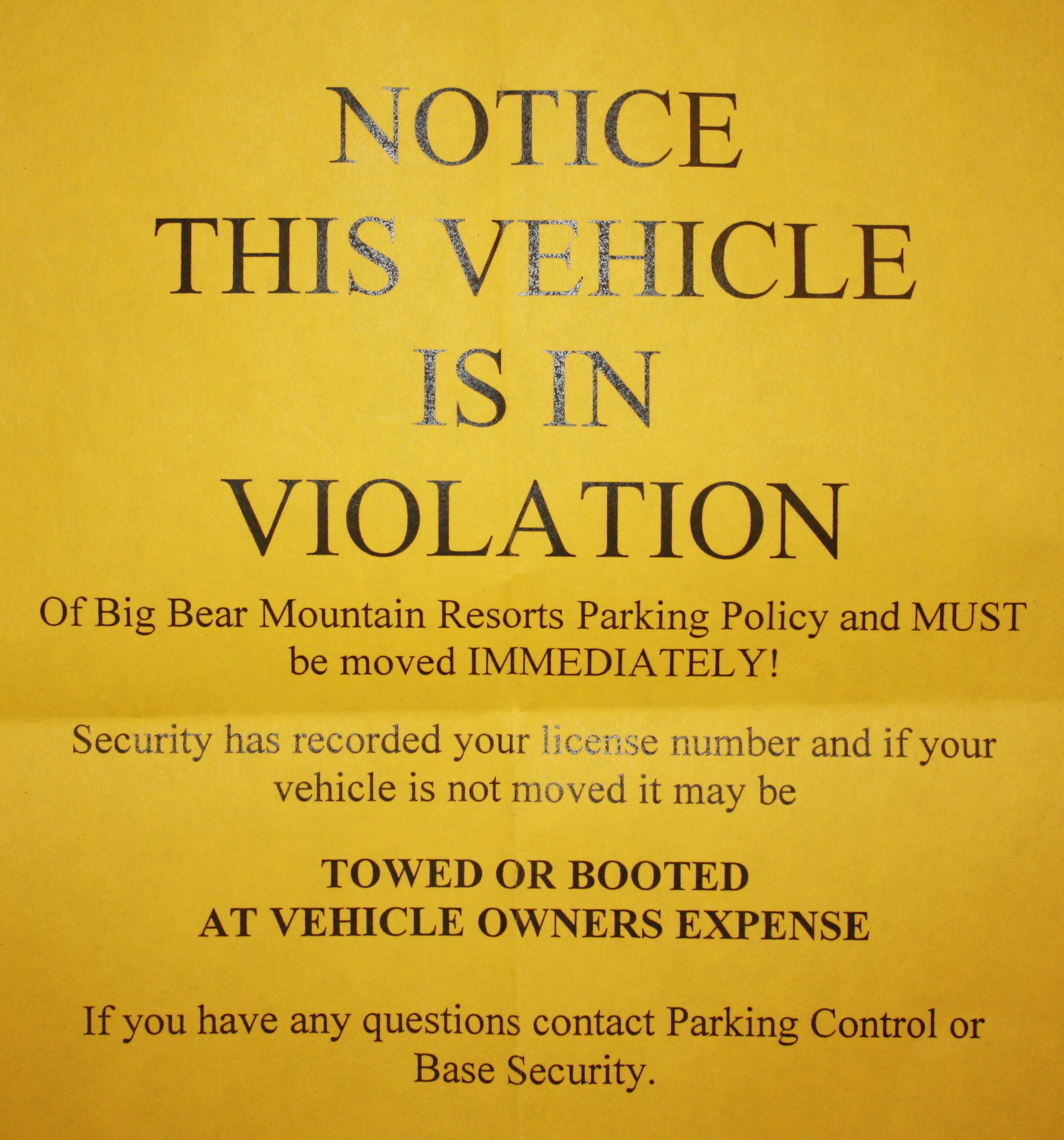 The Snow Junkies landed Friday morning in Los Angeles, picked up our RV from a nice little German man, and took off straight to Bear Mountain, about two hours from Los Angeles.

There are three ways to get to Bear Mountain from the city. I chose the shortest mileage route. I chose wrong. We took the newly dubbed Mystery Machine straight up winding corkscrews for what felt like hours. Can’t imagine what this road is like with any nasty weather or accidents.

Our first night in the RV, we cracked open a few Keystone Lights, tried to get the furnace working, and promptly crashed out. We were woken at 3 in the morning by security who left us this friendly note:

After spending the rest of the night in downtown Big Bear Lake, we returned the next morning to grab tickets and hit the hill early before the MLK crowds swamped the mountain. We started with the steep cruiser, Geronimo, off Bear Peak before moving over to the slightly smaller Silver Mountain.

As luck would have it, the Burton Demo Tour was in town this weekend, which meant free rides on Burton’s newest boards. Bear Mountain is a scene. It’s like LA on the ski slopes. People were dressed to impress and enjoying the sunny day on the party deck. We met a good chunk of folks that weren’t even there to ski or ride, just having cocktails.

Bear Mountain is also one big jib park. Most ski areas keep their park stuff contained to one or two areas. Bear Mountain has turned one of their peaks, Goldmine Mountain,  into one massive park. There’s half pipes, rails, boxes, and hits every few feet.

Bear is not a big place so we ran through all the runs fairly quick. But it’s close to Los Angeles, it’s sunny, and a great place to ride park.

You can’t beat the sunshine deck at Bear Mountain using the patented beer can in glove trick to drink your smuggled beer. On our way out, we stopped at Bear’s Thrift and Treasures to see if we could pick up some RV essentials on the cheap.

Words fail how to describe this place. It’s like your grandmother’s attic and grandfather’s barn vomited all over the backyard, and then some of that vomit filled up an entire house. Season two of Friends on VHS? Check. A life-sized ET hiding in the kitchen? Check. And this wasn’t for sale — but a cat on a leash? Hilarious.

We did end up with a rug, silverware, two bowls, and a pot for under ten bucks.